In San Diego and many California cities, more and more people are unable to pay increasing rents, and even fewer can make a down payment on a home and manage a mortgage, so they face the prospect and reality of housing insecurity and homelessness.   Well-intentioned programs from federal to state and local governments and non-profits fund and support various housing solutions to reverse the tide.   However, most public and private housing and homeless advocates agree that we cannot spend our way out of this conundrum.    What if we generated public revenue in a way that discouraged homelessness and made housing more affordable at the same time?

They do it in Texas and Pennsylvania and other states.   In Texas, they have no state income tax, but higher property taxes.   About 15 cities and districts in Pennsylvania reduce the tax on improvements such as homes and buildings and slightly increase the fee on land which encourages landowners to use their land productively and put it to better use which helps affordable housing and increases development.   We can’t do anything quite like that in California right now because of Prop 13, but Prop 13 may soon be modified and improved. 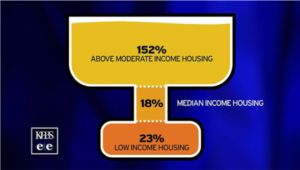 One of the leading causes of homelessness is unaffordable housing.   In San Diego and other cities we over-build high income housing and under-build median and low income housing.   Local San Diego observers point out that the situation is getting even worse.  Many cities and countries have lower rates of homelessness than San Diego such as Pittsburgh, Cleveland, Australia, New Zealand, Taiwan, Hong Kong, Singapore and the happiest country in the world, Denmark.   How do they do it?  They all have some variation of reducing taxes on labor, sales, homes, and improvements and deriving slightly more public revenue from underlying land & natural resources.

Nobel Prize-winning economist Milton Friedman calls this the “least bad tax.”  In San Diego, the Port of San Diego is an example of collecting ground rent, a variation on this theme.   It works very well.    Alaska also provides an example of reducing taxes on production, labor, and income.   It eliminated state income taxes entirely and on top of that pays Alaska residents about $1,500 per year ($1,600 in 2018) and $1,606 in 2019—a kind of reverse income tax.  They are fortunate to have substantial oil revenues and a population of only 738,068 (in 2018) and 731,545 in 2019.

One of the biggest impediments to affordable housing in California is Proposition 13.  Low property taxes attract local as well as out-of-town and international land speculators who profit from the rise in land value.   Low property taxes mean they can benefit from local government spending on police and fire protection, good schools and other infrastructure and increased population while allowing others to pay in the form of higher sales and income taxes.  They can and often do “sit” on vacant land and hold out for higher prices in the future.   British Colombia in Canada wisely discourages excessive land speculation by foreign entities by tacking on an additional 1% property or land tax.   In states like Texas where properties are famously affordable, property taxes including land value returns are higher, and like Alaska (and six other states), Texans pay no state income tax.  Forbes ranks Texas first for current economic climate!

We cannot overnight easily change Prop. 13 which limits property tax to 1% of the value of property in 1978 or the most recent purchase price plus a rise of only 2% per year.   Prop 13 did a good thing—capped increases on improvements and did a bad thing—permitted—even encouraged all property prices to rise without any way to recapture land value gains beyond the artificial flat rate of 2% per year.

There are two main problems with Prop 13:

1).  Property values increased about 10% per year over the past 30 years and 7.4% per year in 2017 and from 2005 to 2017 according to the Union-Tribune, 61.1% in La Jolla, but the property tax only goes up 2% per year.    Great if you already own property, but if your children are trying to buy a home to raise a family, they have to pay the owner the significant gains, while the owner does not have to repay society for the unearned increment or property value gains caused in great part by public (government) spending (on police, fire and schools).

2).  Houses or improvements deteriorate and lose value over time and the underlying land value increases or appreciates over time.   The property taxes—a combination of improvements and land taxes increase at only 2%   Over time improvements become overtaxed and land undertaxed just the opposite of a more honest policy.

We need to begin to correct this imbalance.  Shifting taxes from improvements to land has the effect of encouraging better use of land.  It discourages withholding land for speculative gain later, discourages empty lots or underutilized land and incentivizes improvement of land, better and more development, building and housing.   It also begins to reverse the relentless rise in the cost of property—a bad side effect of Prop. 13.   It does this by reducing the cost of improvements including housing while generating revenue from natural resources.

If we lowered taxes on incomes, sales and improvements, people could more easily bear slightly more on the land portion of the property tax that appreciated without their effort.    This concept of land value recapture is sometimes used to pay for transportation infrastructure.  The proposed solution is to begin to gradually create more honest assessments on the value of land and reduce or eliminate the tax on improvements.   That will encourage the construction and maintenance of new and existing homes—just what we need to create more affordable housing and reduce homelessness.    It works in other places; it can work in California.

Alan Ridley lives in South San Diego County, is semi retired from Cuyamaca College.   He is affiliated with the Foundation for Economic Justice (foundeconjust.org) and now grows water wise edibles mostly Moringa, the Miracle Tree & Dragon Fruit (Pitahaya).   He can be reached at (858) 883-7314 or weprosper2@hotmail.com.